Text of the Ancient World

The Museum of Fine Arts, Boston’s ‘Art of the Ancient World’ section is full of objects collected from Egyptian, Greek, Babylonian, and various other ancient cultures. Marble sculptures, painted vases, re-constructed tombs, and intricate jewelry line the walls. Despite having spent a lot of time visiting this section of the museum through the course of my four years in Boston, one thing I never paid close attention to is the idea of textuality, and textual objects within the exhibit.

When paying particularly close attention to these objects, however, it turns out that much of the text that has been preserved is ultimately focused on one thing - memory.

If you were a king and were ordering a temple to be built in honor of a deity, how would you want future generations to remember who ordered the original work?

In the Post-Akkadian Period (~2200-2100 BCE) in Lagash (modern-day) Southern Iraq, King Gudea ordered the rebuilding of the temple of Ningirsu, the state god. As part of this rebuilding, Gudea had two terra-cotta cylinders inscribed to explain that he was the source of the rebuilding, and to emphasize his relationship with the god Ningirsu. 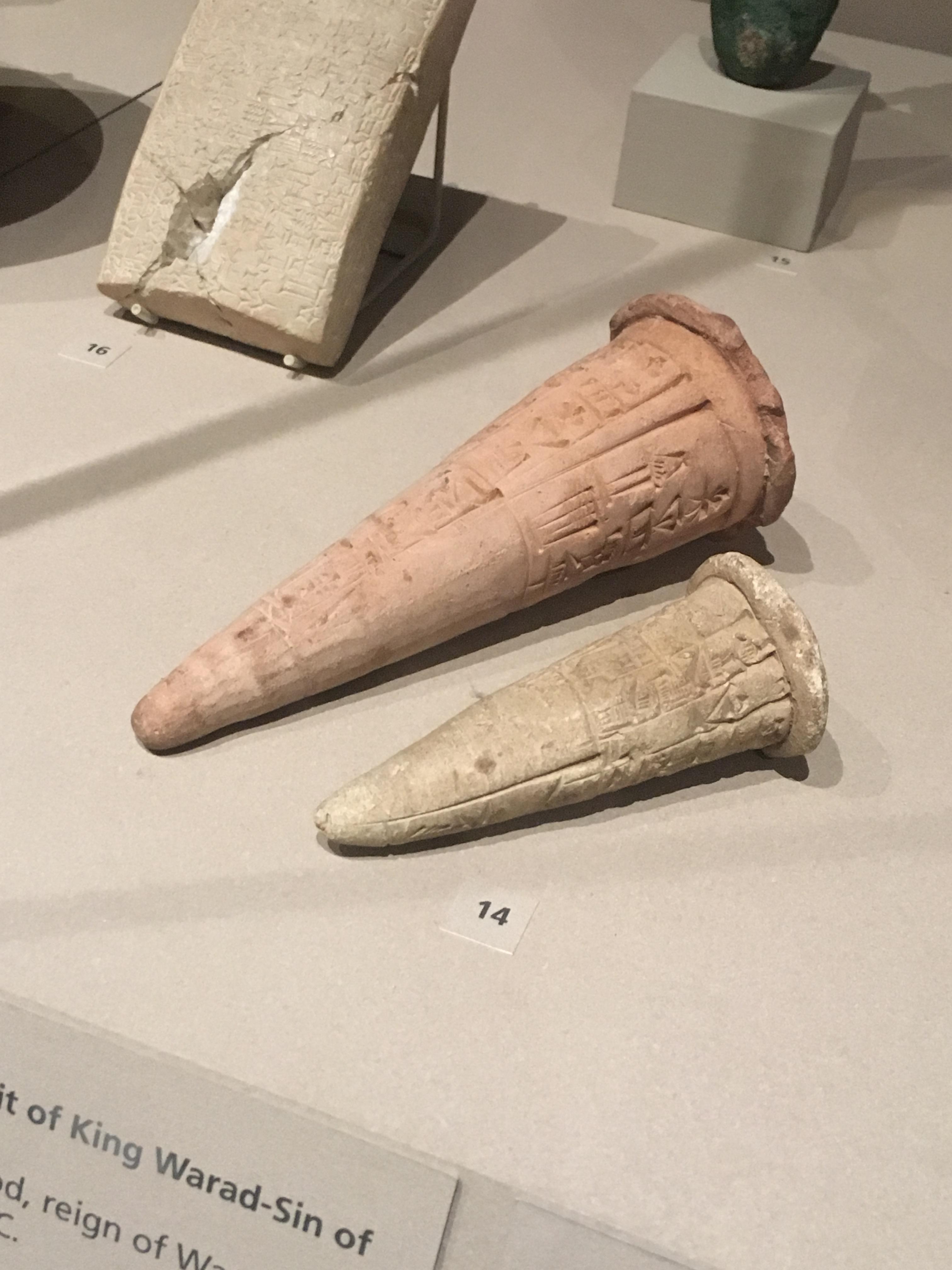 These inscribed foundation deposits were relatively common for the time period. These deposits could be created via stone tablets, clay cylinders, or even clay or bronze pegs that were thought to “ritually fix” the temple into the ground. In the case of Gudea’s deposits, these terra-cotta pegs likely would have been created with this “fixing” in mind. Thinking about the material of these deposits, it likely would have taken some time, patience, and precision to carve out the inscriptions on the the cylinders. As such, it was probably a very manual, intimate process - the person charged with carrying out the inscriptions would have had to hold the shaped terra-cotta material in their hands, taking great care not to make any mistakes.

The language represented on the deposits appears to be much closer to the language found on a cuneiform tablet from Sumeria in 2037 BCE than other written languages we see throughout the museum. As such, language is represented in the forms of lines and shapes, all strategically placed together to form the inscription.

One floor above Gudea’s foundation deposits, we find artifacts from the ancient Roman world. One such artifact is the cinerary urn of L. Cassius Colonus Colonianus. 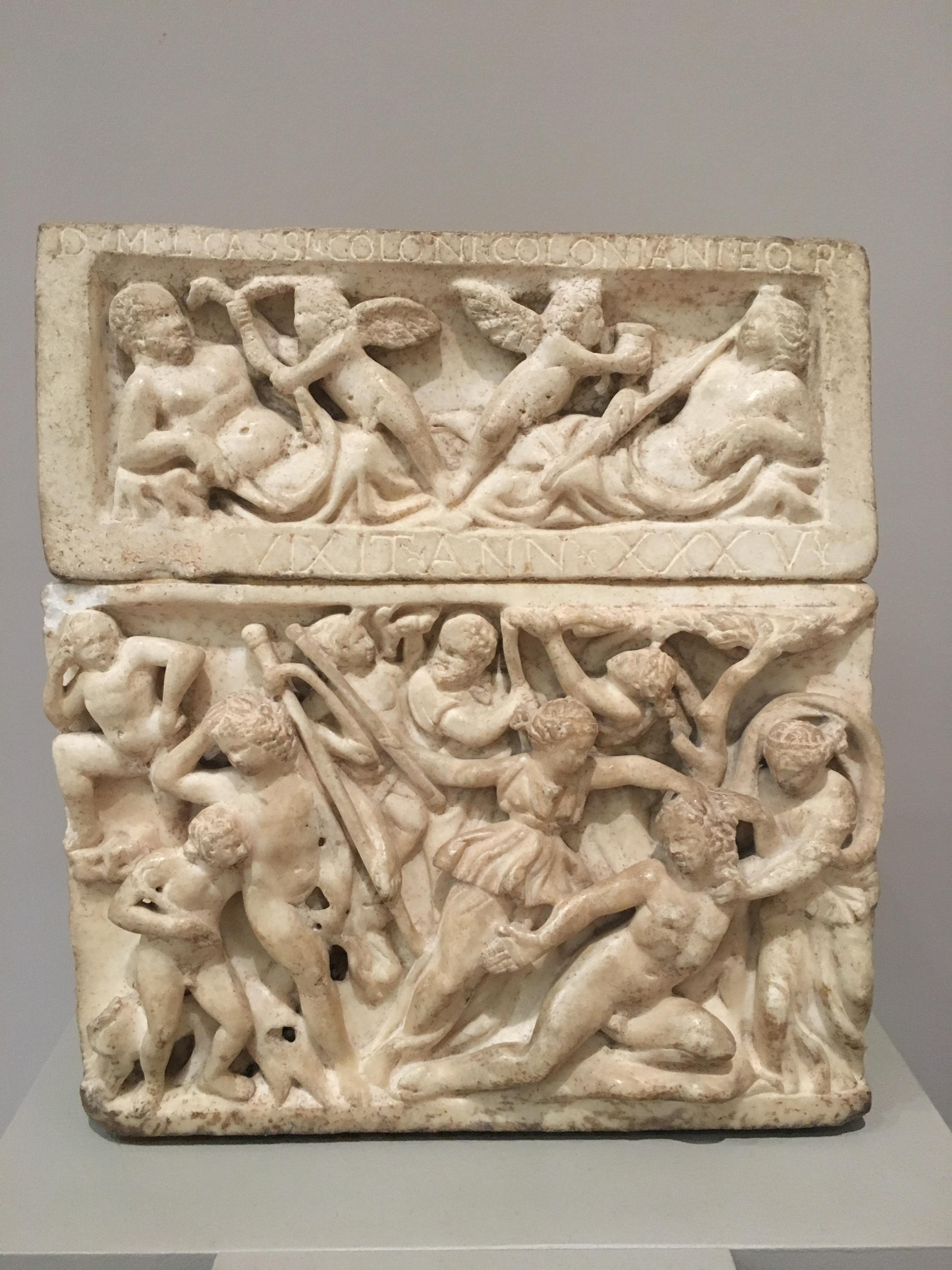 Created to hold his ashes, Lucius Cassius Colonus Colonianus was a member of a high social class called equites, or knights, during the late Imperial period (about 200 CE) in Rome. His urn is intricately decorated, depicting the climactic scene from Euripedes’ The Bacchae, wherein women worshipping the god Dionysus are so overcome with passion that they tear Pentheus, the king of Thebes and an opponent of Dionysus, apart.

Along the top and bottom of the lid of the urn is the inscription:

To the spirits of the dead of Lucius Cassius Colonus Colonianus, a Roman equites; he lived thirty-five years.

This brief inscription on the urn gives us just enough information about Lucius - who he was, what he did, and how old he was when he died. Much like a more modern-day version of a headstone found in a graveyard, this short description identified the contents in a simple, clean way to anyone who came across it.

This particular urn was crafted from marble. From the intricate scene depicted on the front, to the lines of inscription, it’s clear that whoever commissioned this urn to be made had the funds to do so. The person in charge of the art and the inscriptions, similar to the foundation deposits, would have had to spend a great deal of time with the object. Carving in marble is no easy feat - it’s a labor-intensive art process that would require one to chip away at the material in order to get their desired design.

Understanding the situation in which these texts existed, and their reason for being created, is vital for understanding the inscriptions on them. In “The Medium is the Message,” McLuhan discusses the idea of new media study and states that it “considers not only the ‘content’ but the medium and the cultural matrix within which the particular medium operates” (11).

It’s clear that whoever commissioned the cinerary urn to be made for Lucius was someone with wealth - as a knight, it is likely that this was even commissioned by Lucius himself before his death. On the same idea, the foundation deposits created to be put into the base of a pyramid speak to the social status of the king.

It’s no accident that the majority of objects that have been recovered from ancient civilizations depict in some way, shape, or form, individuals from those societies with money and power. People like Lucius and Gudea were in positions of power, which afforded them the ability to have intricate objects created for, and in memory of, them.

This idea of memory in objects harkens back to Plato’s dialogue, “Phaedrus.” In this debate about the invention of writing, Socrates says:

For this invention will produce forgetfulness in the minds of those who learn to use it, because they will not practice their memory. Their trust in writing, produced by external characters which are no part of themselves, will discourage the use of their own memory within them. You have invented an elixir not of memory, but of reminding…

In a time when oral culture was all that people knew, Plato’s ideas had merit. But reflecting on his position in the context of these two distinct artifacts sheds light on how misguided he was.

Though Plato’s main argument about writing was focused on losing memory about one’s culture and that culture’s stories and history, it can still be applied in a more expansive, broad way. Yes, our memory as human beings has weakened. But orality and internal memory are simply not enough; Gudea and Lucius knew that. That is why they chose to have their names set down in language, to preserve their memory and their lives in an object that would continue to exist for centuries after they were gone; they didn’t want to be forgotten.

Though these two objects are very different in their mediums and their sizes, their innate purposes remain one and the same: preservation of the self, and of one’s memory long after they are gone.