Egyptian Book of the Dead

While at the MFA, I decided to focus my study on texts that were funerary monuments in order to ruminate on how life and death interact with real-life texts. In particular, I chose Sarcophagus of Queen Hatshepsut, recut for her father, Thutmose I created in Egypt around 1473–1458 B.C., and Tomb relief of the Publius Gessius family created in Rome around 30-20 B.C. Referring back to the McLuhan, the medium is the message. These carved funerary pieces inherently convey certain cultural or sociopolitical values and ideas; they are more than the symbols and words that are on each piece. I will contemplate media and materials before I contextualize each item and subsequently connect the two to broader themes.

Here is an image of the sarcophagus: 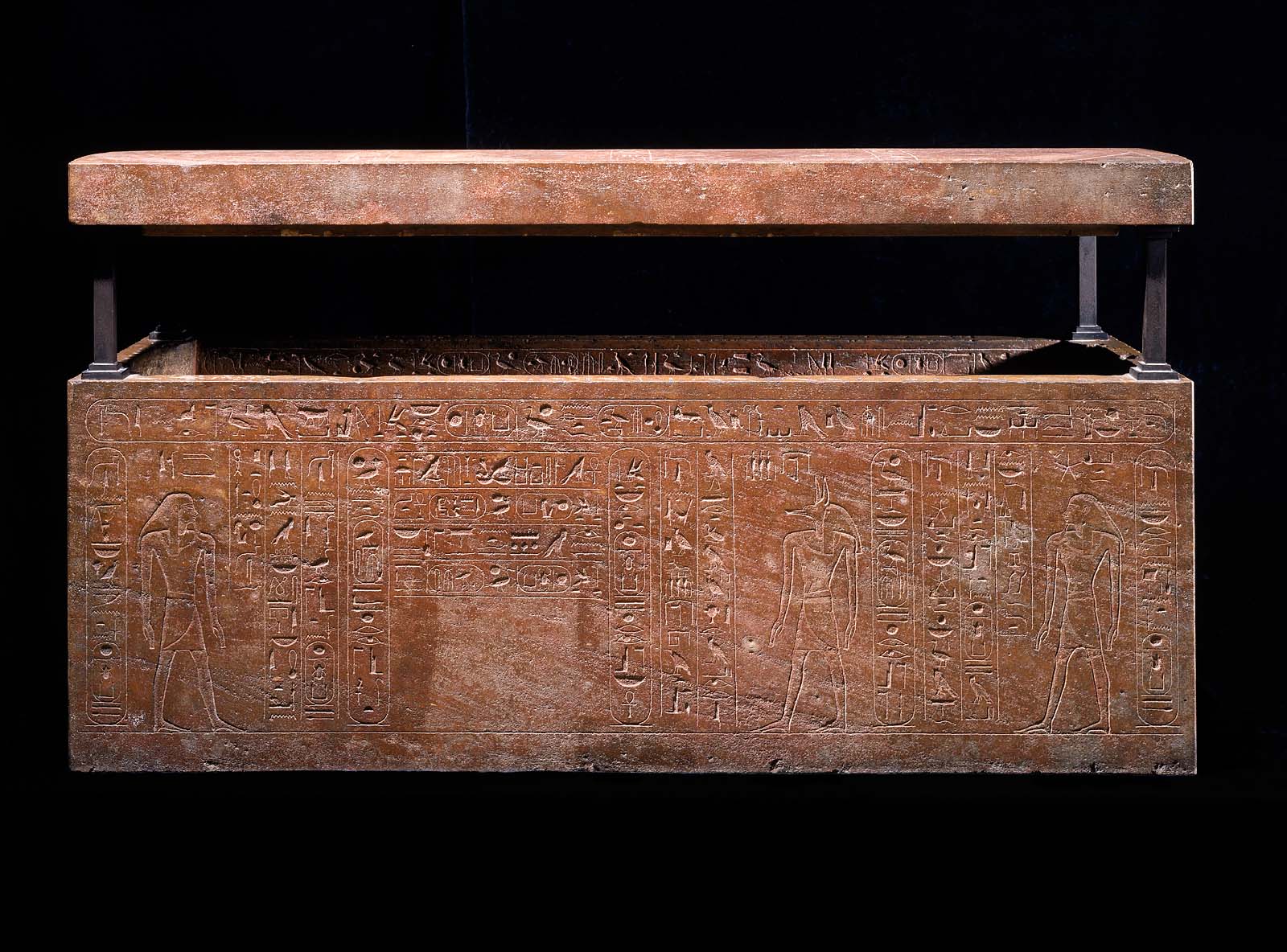 Here is an image of the Roman relief:

First of all: the sarcophagus and the tomb relief are not easily accessible texts. They obviously could not be transported or shared very well. The objects are both large and intricately crafted. Those who would encounter the sarcophagus in particular were most likely the elite, higher class, or holy - to access such large-scale texts requires status. The sarcophagus, however, was most likely the more inaccessible of the two objects, considering Egyptian burial practices and how sacred they were considered. The funeral relief would most likely be visible to other Romans, however, as inferred through the inscription and imagery which tells the reader the person and rank of the dead person. After I surmised this idea, I found a blurb at the MFA that stated funerary reliefs lined the roads out of Rome during the late Republic and Augustan periods.

The sarcophagus is made out of quartzite, which held symbolic significance in Egyptian culture. Its intended use was to aid the king’s journey, since the stone’s red color connected to the sun - the ultimate symbol of rebirth. According to the blurb accompanying the piece, the outer sides of the box and lid were shaved down and the texts and deity figures were recarved, since Queen Hatshepsut decided to turn her tomb into one for her recently deceased father. The original decoration can still be seen on the lid, floor, and rim, where only the names were changed. This fact tells us a few things: first, the material and craftsmanship must be rare, since they did not create a new box from scratch; second, symbols and deities were changed depending on the person being entombed, showing a level of religious personalization; third, the language is extremely adaptable - the only bits that had to be entirely changed were the hieroglyphs that spell Hatshepsut; they were filled in with resin and recarved to spell Thutmose, since the names share no signs in common.

The Roman funerary relief is carved from marble, which was most likely chosen for its affordances - it is relatively malleable and easy to come by, but still worthy for an effigy. There seemed to be little information about who or how this piece was carved, although I can guess that a Roman artisan was hired by the patron for this project. Since artistry in this era wasn’t about the individual artist and more about the finished product in its specific social (public) context, it makes sense that there is no data on this point.

The decorative scheme of a sarcophagus helps carry the king or the queen entombed into the afterlife. The layers of text in the carvings and inscriptions are intricate: for example, the protective deities displayed recite prayers and incantations for the king. The sky goddess Nut is accompanied with the king’s posthumous prayer: “O mother Nut, stretch yourself over me and place me among the indestructible stars, so that I shall not perish.” The figural images in themselves carry symbolic and spiritual significance, but their function is supported with the written word. Without the lingual support, if you will, the king would most likely find passage into the afterlife, but his posthumous prayers seem to ensure it. Language, even in death, reigns supreme in the hierarchy of pictorial text.

Hatshepsut’s filial devotion is yet another form of text that adds to its larger cultural purpose. She used the sarcophagus made for her own burial for her father’s, which seems like an entirely personal, respectful decision. The in memorium is not historically known, but signified with a textual inscription: “She [Hatshepsut] made it as her monument for her beloved father, the good god, lord of the Two Lands, king of Upper and Lower Egypt Aakherperkare, the son of Ra Thurmose, vindicated.” While the Queen is referred to in the sentiment, the emphasis is on her father and his role in society. These epithets appear to serve as further proof of his well-deserved deliverance into the afterlife, sanctioned by those on earth as well as the gods.

As seen so far, the function of the sarcophagus and its text is to help the Thutmose enter the afterlife through religious rites. The Romans’ use of funerary monuments wholly differ in this regard: portraits of the people on these reliefs are of freed slaves and their offspring, and they are accompanied by inscriptions that tell the viewer the professions and familial relationships - in other words, they conveyed their social status to the public, who sees these reliefs on their way out of Rome.

The inscription on the relief at the MFA identifies the family as that of Publius Gessius, who is the central figure, dressed in military garb. Next to him is a slave he freed, Fausta Gessia, and their son, P. Gessius Primus, who is also a freed slave. Another inscription says that Fausta built the relief with money from Primus’ will.

In short, a lot of information is given to the reader in the primary text (if one can read Latin, that is). The reader finds out the names and rank of each figure, yet the meaning of their status is supplemented with the clothes they wear. Publius Gessius’ clothing shows the viewer that he was of a high rank in the Roman military; the clothing contrasts with the more casual tunics of his wife and son. The two gain more status by being associated with Publius, his status, and his money, but their origins as slaves are reinforced in the inscription. The contrast of clothing also depicts the reinforcement of class. Death, then, serves as another mode in which to express class, wealth, success, and legacy.

The written word in both of these examples supplement their overall meaning; it is not central to either work, as they could function as funerary objects without it. However, language has power in both cases. Egyptian craftsmen found hieroglyphs as a necessary means to ensure the protection and deliverance of Thutmose, as pictorial representations of deities were not enough. Hieroglyphs come from the living, the deceased, and the gods, showing a sort of universality that connects all beings - including those who read the inscription. They move one into a spiritual realm that offers prayers to Thutmose.

On the other hand, the language on the Roman relief is far from spiritual; it is entirely sociopolitical. It offers background for who the figures are and what rank and relation they hold in life and in death. The pictorial imagery also helps one relate the figures and their positions in the human world, if they choose not to read the inscriptions. Language, while still important to the relief and the name of Publius Gessius, is less important than that on the sarcophagus.

I feel like the analysis of these two works was possible with the readings completed in the course so far; yet, I don’t necessarily want to force a connection with the McLuhan or the Liu - the latter in particular would be difficult to apply to this analysis. However, I think the framework of affordances and losses in Plato’s “Phaedrus” works well here. I see few losses considering the intended functions of each object - pictorial text does a well enough job, but the text lends the utmost affordance of adding extra information that could not be conveyed as well without it.

On the other hand, Butler’s piece raises the question of whether or not the text is necessary. Egyptian and Roman tradition deemed textual language necessary - yet, one could surmise the function of each funerary object without it, if in theory one could not read, write, or speak.

The Gleick reading definitely help set the scene for ancient readings and the origin of language. I would like to end this lab with the following quote, which serves as a good entry point into how the textual information interacted with these funerary traditions in Egyptian and Roman culture: “Information has been detached from any person, detached from the speaker’s experience. Now it lives in the words, little life-support modules. Spoken words also transport information, but not with the self-consciousness that writing brings” (39).