In his article, Visible Language: The Earliest Writing Systems, Christopher Woods introduces the four original systems of writing, all independent of each other: Mesopotamia, Egypt, China and the Mesoamericas. We also learn in his article, two forms of textual writing:

While the concept of semasiographic writing entails only representing general ideas, there are two artifacts at the Museum of Fine Arts that in their individual analysis contradict this concept. Both the Mesopotamian Seals (2100 - 1500 B.C.) of the Akkadian period and the Ancient Egyptian, Sarcophagus of Khoper-Re (570 - 525 B.C.) represent that, through their imagery, hieroglyphics, purpose and materials, semasiographic writing depicts far more than simple ideas. In fact, this kind of writing is quite complex and can indeed, embody a bond to speech communication between their individual cultures.

Known as kisihib in Sumerian and kunukku in Akkadian, Mesopotamian (cylinder) seals were essentially impression stamps.

Its small form makes the purpose of the seal very pragmatic. While some seals were pocket size, other seals were cylinder and often attached with string. Owners would then always carry them around their necks and eventually became indispensable for all businesses.

In the Mesopotamian seals exhibited at the Museum of Fine Arts, the seals vary in stone material. Whether semi-precious or limestone, seals varied in stones such as:

Each seal was stone carved and would make its impression when stamped or rolled onto wet clay. Many impressions proved ownership or property, which was especially prominent in the transaction of trade and business.

These stamps were recognized as each individuals signature since they were exceptionally detailed in design and often depicted personal relationships.

As the above picture depicts, the inscriptions depict the name of the owner and his or her title (right). The figure imagery (left) however, expresses the owners relationship to a specific god(s) or ruler.

What is important to note about the Mesopotamian seals is that they depict both glottographic text (the hieroglyphics) and semasiographic text (figure imagery).

What I find most intriguing both academically and visually, is that writing and reading were a result of the Mesopotamian business transactions. Reading and writing evolved in parallel to the economic evolution of the civilization. However as the use of seals became more prominent in trade and business, the design of seals also became more intricate.

The increasing amount of detail shown in the figures implies that, while scholars may argue only represent the broad relationship between owner and god (semasiographic), the detail of the figures actually aligned with true oral stories (glottographic).

The evolution in business, design, and literacy portrayed through the seals represent a culture of extreme wealth and education. What is fascinating (to me at least) is the fact that this type of education was taught through something initially motivated by art.

The Mesopotamia culture was able to read and write through their own form of texts, and the large scale success of the seals, portrays the cultures sophisticated sense of distribution. 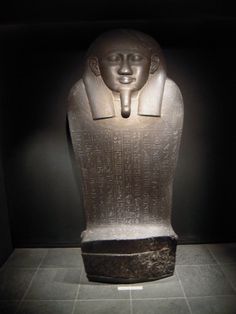 The lid of Sarcophaguses in Ancient Egypt were often seen and used during the Sate Period in Giza. Cemeteries specifically, became fairly prominent during this time because it was a period of reuse and revitalization for the Egyptian culture.

As a medium known to be placed in some form of cemetery, sarcophaguses inevitably have a spiritual purpose. The sarcophagus of army General Khoper-Re of the Sate Period (above) is made of greywacke: a dark grained sandstone.

Greywacke becomes important in this sarcophagus because of its 15% make up of clay. Its clay-fine matrix gives the material the ability to be engraved.

Khoper-Re (Kheperre) chose to be buried in the Field of Tombs located East of the Great Pyramid. Under the rule of Khufu, the Field of Tombs was a cemetery reserved for members of the royal family. Many officials of Dynasty 26 chose to convert many old burial shafts, belonging to the royal family for their own purposes. That is, for their own tombs.

Khoper-Re refused to follow that new “norm” and dug out a completely new tomb for him and his family. The entire burial shaft went 50 feet into the ground and contained 10 other burial chambers at various levels. As the first to be buried and the most important among his family, his chamber was closest to the bottom at the deepest level.

Not only is Khoper-Re’s sarcophagus impactful in size, but it is also impacting in the text and imagery it depicts across its lid.

Below the collar on the sarcophagus is Khoper-Re’s name depicted in vertical text. On the other side of the collar is also depicted the names of the four Sons of Horus. They are known as deities of the period who protected the internal organs.

The main textual inscription (seen on the body of the sarcophagus) is a 15 line vertical inscription. The inscription contains several passages from the Pyramid Texts and prayers originally written for pharoahs of the Old Kingdom. One of the most prominent inscriptions however is a passage from the Book of Dead.

These passages were specifically chosen by general Khoper-Re and although there are no direct translations of the inscriptions, the text portrays his personal spiritual and religious beliefs and the importance of them to the Ancient Egyptian culture.

The fact that these hyroglyphics are presumably translated to specific stories of religious text implies that, like in Mesopotamia, the images depicted were understood as accurately as today’s modern glottographic texts.